In the United States, there seems to be a competition over who can cram the most hops into a bottle of beer. While that’s perfect for all of my IPA loving friends, it leaves folks who enjoy more traditional brews searching for something that fits their tastes. Something I was lucky enough to have discovered for myself was Black Mesa Brewing Company. Those lads know how to brew good beer that doesn’t make your whole face pucker.

Brad Stumph the science guy and Chris Sanders the brewmaster guy started Black Mesa Brewery in Oklahoma City in 2012. As with any new business they had high hopes, a clear vision, and untapped potential. (Pun intended.) They were cranking out some great beers and sending them to local bars and package stores. Then in May of 2013, a tornado bent them over the beer barrel and demolished their facility. At the time I read the article, I hadn’t heard of the brewery, but I still shed a little tear for them. Since I am a business owner and a beer lover, I felt heartbroken for them. But after the initial shock of the event, they undauntedly started looking for a new place to brew. They looked at a few larger sized breweries in the Midwest and decided to contract brew with the really cool guys at O’Fallon Brewery that is in a suburb of St. Louis, Missouri.

Most people, who have had a terrible event happen to them like a tornado, choose to rebuild. The disruption or devastation of their lives is a battle cry to overcome it. But Brad and Chris did what I would have done. They thought about it and weighed their options. Here comes my soapbox rant about my home state. Oklahoma has some of the worst bullshit laws pertaining to alcohol in the entire country. We still have 3.2% ABV beer that is sold in grocery stores and convenience stores. It can be stored and sold cold. Liquor stores can carry regular strength beer like the rest of the country, but it has to remain room temperature. That is just one out of dozens of inane laws that people in the alcohol business have to deal with. The law that Black Mesa faced was they were not allowed to have a tasting room in their brewery if they didn’t offer 3.2% ABV versions of their beers. They weren’t about to ruin beer just to appease laws that were passed in 1959 and haven’t changed since. They decided they would not rebuild in Oklahoma until that law changes. I wholeheartedly applaud them for that. Brad said in an interview, “We are one of the remaining 3.2% states. A change in this law would give us the confidence that a physical brewery could be a viable business in our home state.” Once again, Oklahoma loses out on a wonderful business because it won’t progress. But luckily for you and me, they continue to brew and sell. They’ve even started distributing in Kansas City. Hooray for them!

I’ve tried all but one of their beers, and last night I had one that was new to me. It was their ES-ESB. That stands for Extra Special-Endless Skyway Bitter. Holy moly, it was delicious. They have said in the past that they are going for more of an Old World style of brewing beer and this one hit it right on the nose. Reminiscent of old British-Style Bitters, this beer has a lower hop content that lets the malt shine bright. The guys also decided to age this beer in used Remy Martin Cognac barrels for about seven months. This added an oaky vanilla taste to the already strong toasted grain, cream, and nut flavors. I probably could have just had this hefty beer for dinner by itself, but I was glad to add it to my meal. I was having some pork chops with sautéed onions and shrooms for dinner and this beer tasted like it was meant for it. I’m honestly putting Black Mesa ES-ESB on a short list of favorites brews. Nice work, fellas.

Black Mesa ES-ESB is 9.6% ABV and I’m not sure about the IBUs

See more about them at www.blackmesabrewing.com

See what else is going on at www.talkingsimian.com
If you liked this review, please share it with a friend. 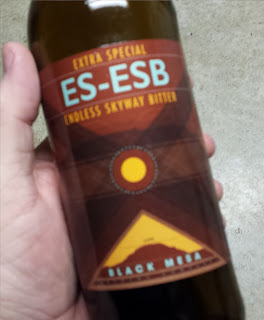 Posted by Jonathan Elmore at 11:33 AM No comments:

The rain in Spain makes puddles in my brain…I don’t think that’s how that old saying goes. At any rate, the rain in Spain DOES make the wonderful Garnacha vines grow to produce some of the best table wines around. One such wine that I tried recently was from Castillo de Monseran.

Monseran is part of a large organization called the Bodega San Valero. San Valero was started in 1945 with a collection of 60 grape growers and wine producers. Those 60 growers started the cooperative as a way for everyone to benefit from everyone else’s knowledge. Imagine 60 small businesses pooling their information to raise each other to a new level of success. That’s what they did. Now San Valero is home to roughly 700 grape growers all working to bring world class Spanish wines to you and me. In total, they have 4,000 hectares of vineyards to oversee, maintain, and choose from when it’s wine making time. That is nearly 10,000 acres of grapes. A great number of these vines are grown in bush vines instead of trellised vines like what you see in most viticultural areas. No long rows of continuous vines, just big fat grape bushes. I’ll include a photo at the bottom so you can see what I’m talking about. It looks so cool.

One of the best growing grapes in this area is Garnacha. The French picked up some of these vines, took them home, planted them, and called them Grenache. They make Rhone wines and the famous Chateauneuf du Pape wines from this grape. It was also thought to be the first grapes that were planted in Australia when it was being colonized after the initial rush of convicts were sent there. Castillo de Monseran is made by Hugh Ryman with the help of Jesus Prieto from San Valero’s wine making crew. What they were going for with this wine was Old World meets New World and they accomplished that quite deftly.

This Garnacha is harvested, fermented, and aged in small oak barrels for a short period of time. The grape juice is bottled within a year of its squish date, or maceration date for those that prefer proper terminology. Doing this maintains a high level of freshness in the wine. That’s the New World part of the wine. The Old World part is the flavor profile that this wine exhibits. With the main flavors coming through as sloe, red currant, and a hint of herbs, the wine stays true to its origins of the Spanish countryside. It has a medium tannin level due to the addition of about 10% of Mazuela grape juice. It gives the lighter Garnacha a little deeper color and heavier taste. Even with a heavyweight in the mix, it is wonderfully easy to drink and it should be consumed sooner rather than trying to cellar it for later. This Old Vine Garnacha has enough complexity to not be a plain old table wine, but it’s simple enough to pair with nearly any dish you would want to have it with. I had mine with beef tips and au jus with chive laden mashed potatoes over sour dough toast. It was perfect.

Go see more about their wine at www.monseran.com 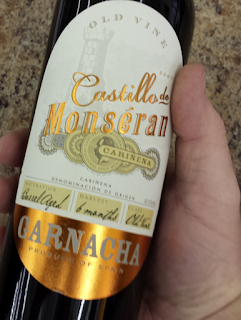 Posted by Jonathan Elmore at 8:33 PM No comments:

Since I’m constantly snooping through the inventory of beer, wine and liquor distributors, I tend to find some things I’ve never tried. When the Boulevard Brewery began releasing their Smokestack Series of beers, I jumped at the chance to bring them into the store. Mostly because I wanted to try them, but customers could try them too, I guess. Me first!!

Boulevard Brewery is located on the Missouri side of Kansas City. In 1988, a guy named John McDonald found a cool old brick building and start installing a Bavarian brew house inside of it. Production cranked up in ’89 and the first keg rolled off the line in November of that year. John loaded up that first keg of Pale Ale in his pickup and drove it to a restaurant a couple of blocks away. Flash forward a bit to 2006 and the brewery jumped from the original plan of 6,000 Barrels per year to 600,000 Barrels per year. That’s a pretty hefty upgrade!

Down the line, Boulevard delved into the super-premium beer category with their Smokestack Series. There are six beers available year-round and a few other special releases and seasonal brews. The all year beers are The Calling, Tank 7 Farmhouse, Tell Tale Tart, Dark Truth Stout, Long Strange Tripel, and Sixth Glass Quadrupel. The last one is the topic of discussion this round.


Sixth Glass is a typical Quadrupel in that it is dark brown, very malty, low hopped, higher in alcohol, and a tinge sweet. What isn’t typical is that a beer so outstanding is made three hours from my front door. I know there are great brewers in the U.S. making great beers, but when I drink a Sixth Glass, I shudder a bit and wonder how this isn’t made by Trappist monks in a Belgian monastery. The name of the beer refers to the Hans Christian Anderson story The Watchman of the Tower. The taste of the beer refers to heaven itself. It has the taste of toasty barley blended with hints of cream, dark caramel, and that heavy artisanal bread you get from a really good old world bakery. I enjoy this beer with smoked ham and soft cheeses. I enjoy it sitting on my couch while I slouch. I would drink it on a train with a crane in the rain… Okay, I’m getting a little too Seussical. The long and short of it is, this beer is incredibly good and at 10.5% ABV, you don’t need much of it to make you feel its effects. It is available in 12 ounce 4 packs and cork-topped 750s. It rates a 10.5% ABV and an IBU of 22. Love it. 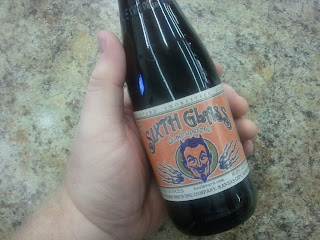 Posted by Jonathan Elmore at 8:42 PM No comments: