It's been awhile since I've reviewed a beer. I've had a few really tasty ones, but haven't gotten around to reviewing them. Today that changes with the Rogue Farms GYO Honey Kolsch.

A quick story about the difference between Rogue and Rogue Farms is the Rogue Farms includes ingredients that they grow themselves. GYO = Grow Your Own. This is a powerful leap toward outstanding artisanal beers. Rogue controls the barley, the hops and all the adjuncts like honey, berries, and even pumpkins that they use in these beers. What this means for us is one company controls every step of production in a process they call Ground to Glass. No middle men taking their cut of profits, no growers spraying who knows what on the produce, and no outside brewery bottling the end results. It's kind of like going to a farmer's market except instead of tomatoes and radishes, we get beer!

Rogue Farms Honey Kolsch is about as good a Kolsch as I've ever had. Kolsch in and of itself is a lightly hopped, light weight beer that is quite refreshing. Adding the wildflower and hopyard honeys only adds to the ease of drinking. Even with the obvious but mild honey aroma and taste, the beer still stays light and crisp. It doesn't have a thick honey consistency like you might imagine. It's just smooth, clean and wicked tasty. I checked out their website and they suggested pairing this beer with cheese and spicy foods. I think that would be a wonderful match. I would, however, like to add that this beer would also pair well with barbecue, tamales, pizza, twice cooked pork, hamburgers, hot dogs, chicken ala king...probably dog biscuits. I honestly can't think of any cuisine that I couldn't at least try to pair with Rogue's Honey Kolsch. Well...maybe not breakfast. My suggestion is go get a couple of the 750ml bottles and drink it with dinner for a week. If something doesn't pair with it, let me know.

Go check out Rogue and Rogue Farms Beers at:  http://www.rogue.com/

Me and my Rogue and my Pink Floyd fridge magnet! 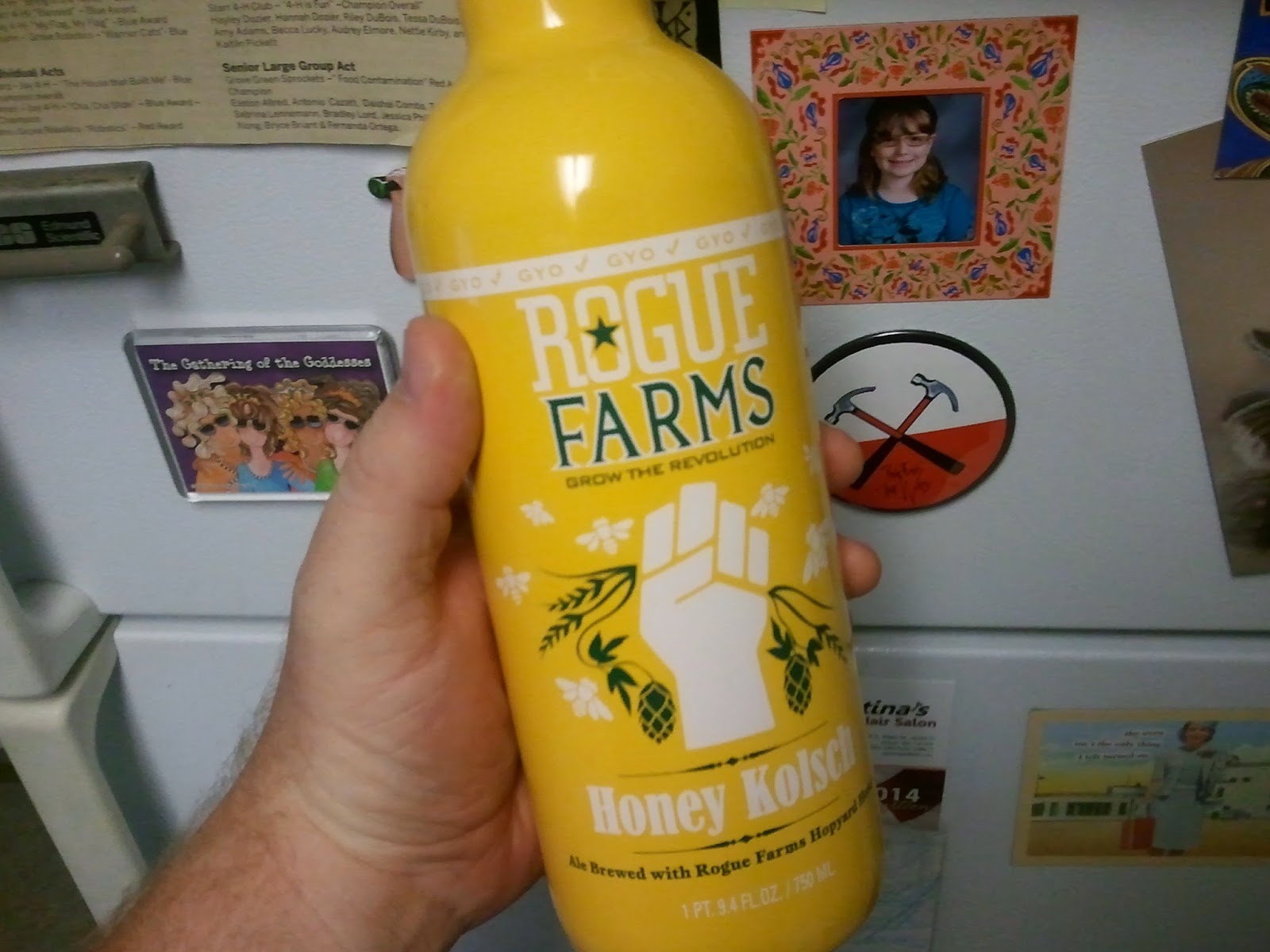 Posted by Jonathan Elmore at 5:52 PM No comments:

"Big things come in small packages", "One man's trash is another man's treasure", "Good things come to those who wait", "Wine makes my clothes fall off." All of these phrases could be associated with my latest sampling of dessert wine, the 2010 vintage of Chateau Roumieu-Lacoste Sauternes. Another great wine under the large umbrella of Kermit Lynch.
A few weeks ago I wrote about having an outstanding California Cabernet with a wonderful steak. What I didn't tell you about was what transpired after the bottle of cab had gone the way of the dodo bird. As my friend Henri and I sat and solved all the world's problems, his lovely wife Linda went for the gold medal in entertaining and brought out (drum roll) bananas foster for our dessert. I still had a little space left so I happily partook of the wonderful dish. Since I always try to be prepared, I happened to bring a little bottle of dessert wine, a split bottle (375 ml) of the Chateau Roumieu-Lacoste Sauternes.
I gave a quick wine explanation after we were finished eating since some people might think the process of making a Sauternes is kind of gross. Hervé Dubourdieu is the winemaker at Roumieu-Lacoste in Haut Bersac. (He also owns Graville-Lacoste and Chateau Ducasse.) Hervé has the task of making this Sauternes for Roumieu-Lacoste entirely of Sémillon grapes, but not just plain old Sémillon grapes. They're botrytized or noble rot Sémillon grapes. Botritis is a fruit fungus that you've seen if you leave strawberries in the fridge too long. For grapes, sometimes it's a good thing to have happen. There is a process of wetting the grapes to make the right conditions for the fungus to grow and do its magic. The fungus breaks the skin of the grape and sucks out a lot of the water. This leaves very concentrated leftovers like sugar, fruit acids and minerals. The grapes are pressed and the juice is fermented leaving a sweet wine.
This sweet wine had the typical aroma of honeysuckle with an added hint of spiciness. The amazing flavors were a rich honeyed apricot with a dash of the spice I smelled earlier. I honestly can't say that this wine would go with every dessert out there, but that's perfectly okay. All wines aren't supposed to go with everything. It would certainly pair well with simple flavors of sorbet or sherbet, fruit tarts or chocolate mousse. One thing I know for sure, though, it pairs extremely well with bananas foster. Love it, love it, love it. 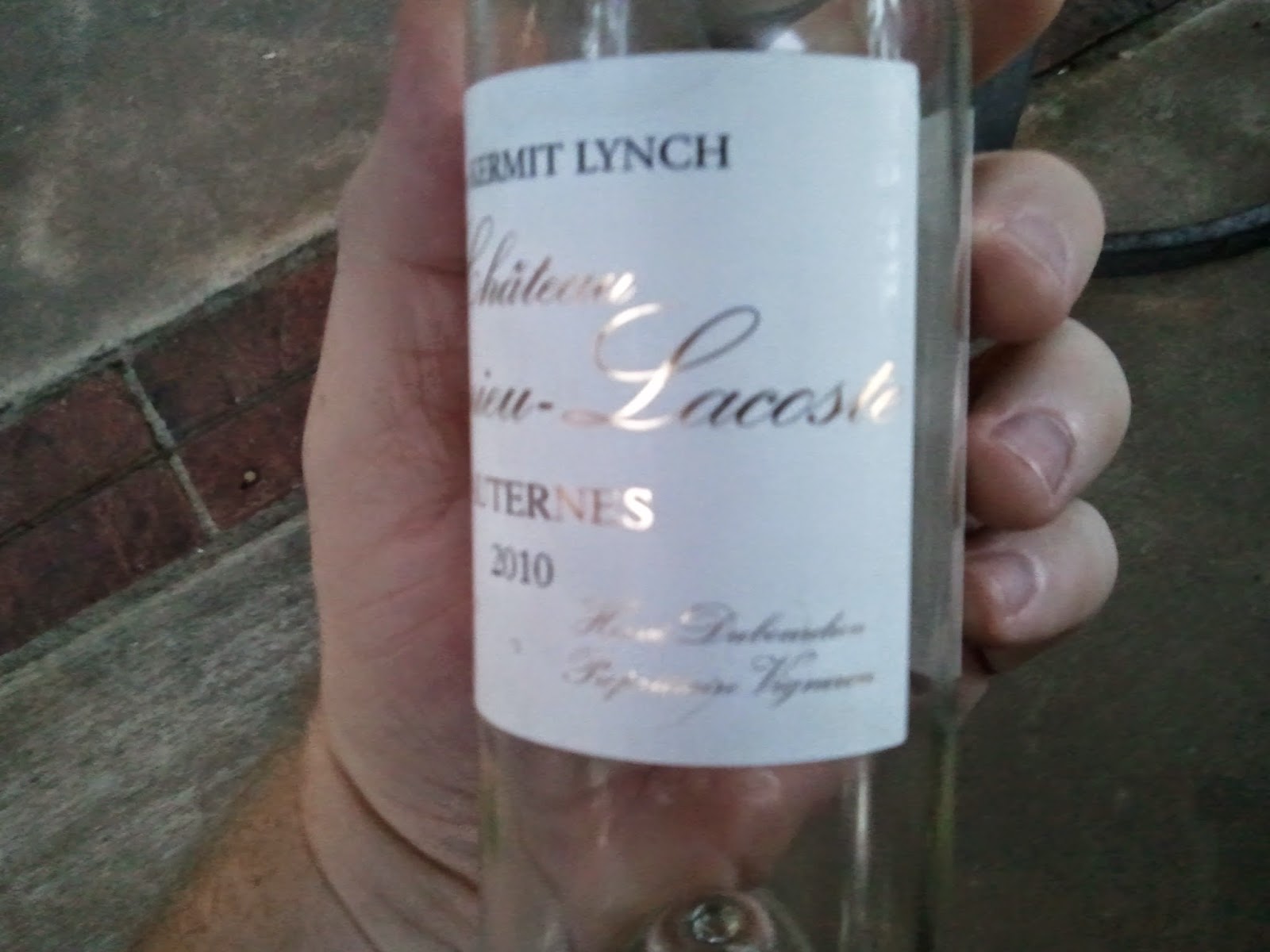 Posted by Jonathan Elmore at 2:28 PM No comments: