I watch a lot of stand up comedy. A lot! It is a sad hobby of mine. Some people go kayaking, some people make birdhouses, I watch funny people tell jokes and stories. While I can't say that all the comedy shows I've seen have been good, one I saw yesterday was great. Streaming on Netflix is Jim Jefferies: BARE.
If you've never seen one of Jim's specials, you should know that he uses very colorful language in his great Australian accent. In particular, he has a knack for saying a word that rhymes with blunt on more than one occasion. This doesn't bother me in the slightest, but a lot of people find it off putting. They should learn to get over that because this guy is hilarious. In other words, this isn't a show for the kiddies.
Jim is a storyteller. He runs through great scenarios about his new son, airports, guns, sex, and a chance encounter with Neil Diamond. He doesn't dance around issues hoping you get the point. He just says it. He doesn't follow up a joke with "Oh man, just kidding, but seriously". He lays it out for you to accept his comedy or not. If you like it, great. If you don't, piss off. That attitude shines bright when he's talking about guns. I've liked Jim Jefferies since I first saw him a couple of years ago. I'm going to be a life-long fan of both his stand up and his TV shows. Watch this comedy special and I bet you'll join me. 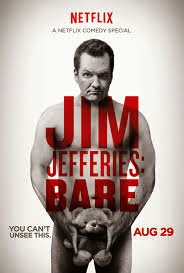 Posted by Jonathan Elmore at 9:39 AM No comments: